On one of my recent  assignments, I had the distinct pleasure to dive deep into Salesforce Groups (Public Groups et al) and Group Members. While most SFDC developers will be familiar with the concept of Public Groups in SFDC, I found it interesting how SFDC actually stores this relationship in its tables.

To start with some background, in Salesforce you can define Public Groups by going to Setup–>Manage Users (Administration Setup) –> Public Groups. A Public Group can be composed of one of the following entities:

Behind the scenes, each of these entities except Users essentially gets assigned a Group Id in the Group table. Each Territory will be assigned two Groups Ids – one for the Territory itself and one to denote the “Territories and sub-ordinates” for that Territory. A Public Group is defined with a Type value of Regular in the Group table. Here’s a typical snapshot from a Group table: 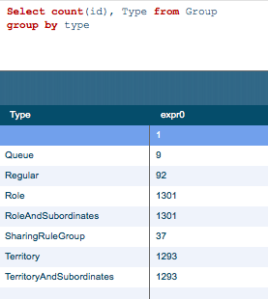 So, if we were to simply figure out what groups a User belongs to, it is not simply a matter of joining Group and GroupMember table (and given the limited joining capabilities in SFDC, it becomes even more challenging). Also, note that the user can be a member of multiple Public Groups. A user could be in a Public Group because of the following reasons:

Let’s first get all the Territory and Role Ids to which the user is assigned, either directly or indirectly. Note that ALL_RELATED_TERRITORY_IDS and ALL_RELATED_ROLE_IDS are Set<ID> types.

Since both the Territories and Roles will exist as RelatedIds in the Group table, lets move all of these into a Set so that we can use later in a SOQL against the Group table.

Phew! So now we have all possible Public Groups the User could possibly belong to (until Salesforce decides to add more Types that can be Public Grouped). The final step would be to take this information and join it with the GroupMember table. The key helper methods that actually traverse the Territory, role and Public Group trees are all given at the end of this post.